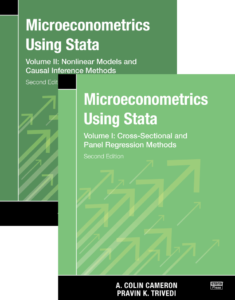 This new edition covers all the new Stata developments relevant to microeconometrics that appeared since the the last edition in 2010. For example, readers will find entire new chapters on treatment effects, duration models, spatial autoregressive models, lasso, and Bayesian analysis. But the authors didn’t stop there. They also added discussions of the most recent microeconometric methods that have been contributed by the Stata community.

The first volume introduces foundational microeconometric methods, including linear and nonlinear methods for cross-sectional data and linear panel data with and without endogeneity as well as overviews of hypothesis and model-specification tests. Beyond this, it teaches bootstrap and simulation methods, quantile regression, finite mixture models, and nonparametric regression. It also includes an introduction to basic Stata concepts and programming and to Mata for matrix programming and basic optimization.

With its encyclopedic coverage of modern econometric methods paired with many worked examples that demonstrate how to implement these methods in Stata, “Microeconometrics Using Stata, Second Edition” is a text that readers will come back to over and over for each new project or analysis they face. It is an essential reference for applied researchers and those taking microeconometrics courses.